How to do the Kettlebell Swing Wrong, but with Greater Benefit 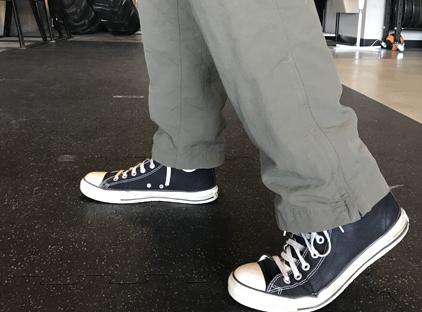 It’s funny, when we see someone doing something abnormal to us our first reaction is, “What the Hell are they doing? They’re going to get hurt!” In fact, some of you twisted people hope they get hurt! You ever log onto social media and see someone doing a squat on a bosu or stability ball? If you’re like me your first reaction is, “Seriously!? Just do some normal weighted squats!” But what if you took the time to read the caption and discover it’s Lindsay Vonn and she’s using stability ball squats as an auxiliary movement to mimic her downhill skiing? Sometimes we need to think outside the box, get a little uncomfortable, and dabble in the movements we deem abnormal to improve. Take the kettlebell swing for example.
Many years ago, I went through the RKC and learned the science, technique and application of the kettlebell swing. Later I had the opportunity to help teach the swing other instructors. Now here I am years later about to tell you there’s a variation of the swing that’s highly effective but looks really wrong to most people. Don’t worry, it’s not the excessively squatty overhead swing that destroys lower backs and shoulders, made famous by some “Box Gyms”. What if we performed a one arm kettlebell swing in a staggered stance? In other words, move one foot back and rest it on your toes so your heal is up. Why? What’s the benefit?
The staggered stance one arm swing is something I’ve seen from one other instructor. It also dawned on me while reading and learning about DVRT (sandbag) training. Josh Henkin touts staggered stance strength work for various reasons: it’s huge carry over to runners, single leg isolation, and real-world application.
As I train for another triathlon I’ve leaned on my kettlebell background for some of my strength training. There’s a ton of research out there showing kettlebell swings are phenomenal for building the entire posterior chain (hamstrings, glutes, and lower back), they’re great for developing deadlift strength, explosive power, and according to World renowned back expert Stuart McGill, the swing is also perfect for rehabbing the lower back. I also know the one arm swing is perfect for teaching the midsection to stabilize while generating some unilateral force. Knowing these things, I started light… a 16k bell, for comfortable sets of 10. This allows me to focus on technique rather than survive a heavy strenuous set and risk injury. One day as I was casually knocking out my one arm swings, I thought about Henkin’s DVRT program for runners and the importance of the staggered stance. The staggered stance allows the body to isolate one side over the other while still providing support with the opposite leg. By combining this foot position with a one arm swing I was able to develop some explosive power in each leg unilaterally, which enabled me to work on my imbalances. By performing the single arm swing in a staggered stance, I addressed core stability, hamstrings and glutes, imbalances in my hips and low back, as well as worked on generating the very same force runners use for miles on end.
I’m not saying the staggered stance one arm swing is for everyone. In fact, if you’ve never performed kettlebell swings of any flavor, don’t do this movement! Occasionally we need to get a little uncomfortable, take a step back and think about what we’re doing. Perhaps there are two schools of thought that can be melded together for the betterment of our training. Sometimes we just need to try some new things, even if it looks weird… It might be exactly what you need! 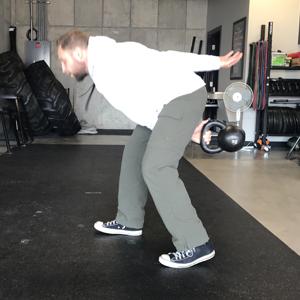 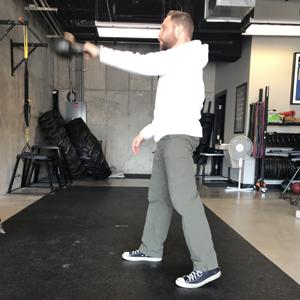